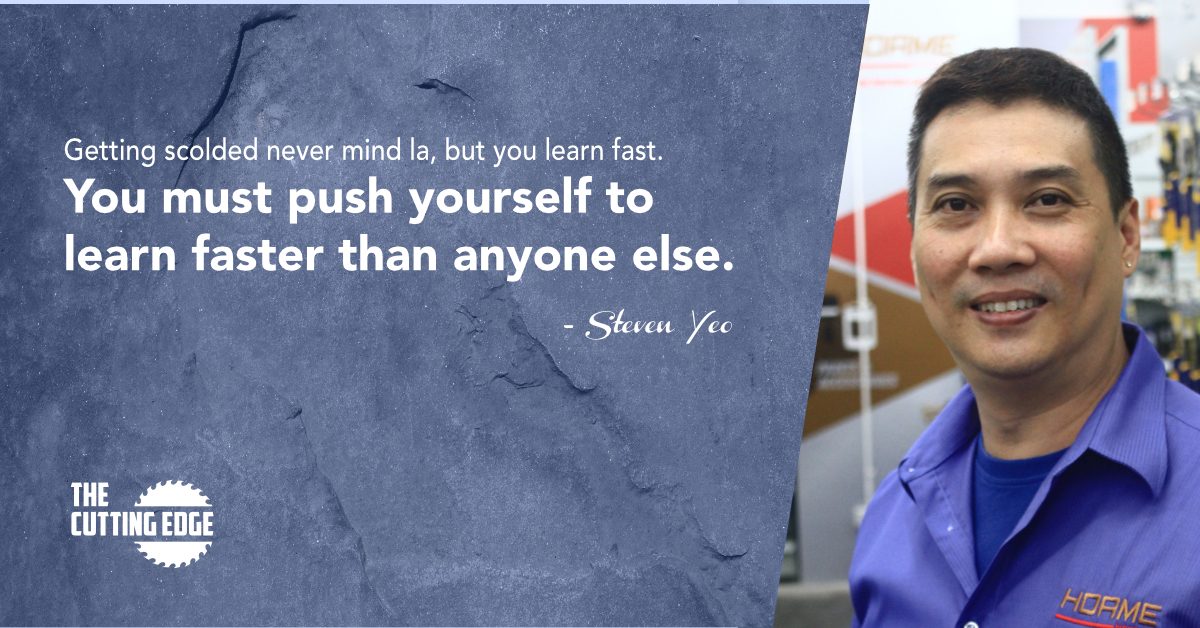 In conjunction with National Day, we’re happy to announce The Cutting Edge: a new series highlighting the important but relatively unknown members of Singapore’s hardware industry.

It was a sunny Tuesday afternoon and I found myself in the most western end of Singapore. I was on the way to the Jurong branch of Horme, the local hardware giant that has been in operation for at least the last 10 years. Looking for the store was a bit of a headache in itself: It was located in the basement of the Big Box, in an unassuming corner of the carpark.

While the exterior seemed drab and unwelcoming, inside was anything but that. Air-conditioned and brightly lit, the rows and rows of hardware products left me spoilt for choice. Interestingly, I noticed that they only kept one or two pieces of each item in stock, a far cry from the full shelves in regular stores that I was used to. I would later understand that this was their newest strategy: to keep retail space small and drive online orders.

It was here that I was introduced to Mr Steven Yeo, a veteran of the hardware industry. With a firm handshake, he led me on a tour of his warehouse next to the store as we chat. While he cuts an imposing figure with a tough guy exterior, his friendliness and calm professionalism betrayed his understanding of the industry. Having worked in hardware stores in the early days, he has amassed a large body of experience, leading him to his current position as Branch Manager. As we walk through the rows of cardboard boxes stacked to the ceiling, he shares with me his career in the industry, anecdotes from his early years and his views on the future of hardware: 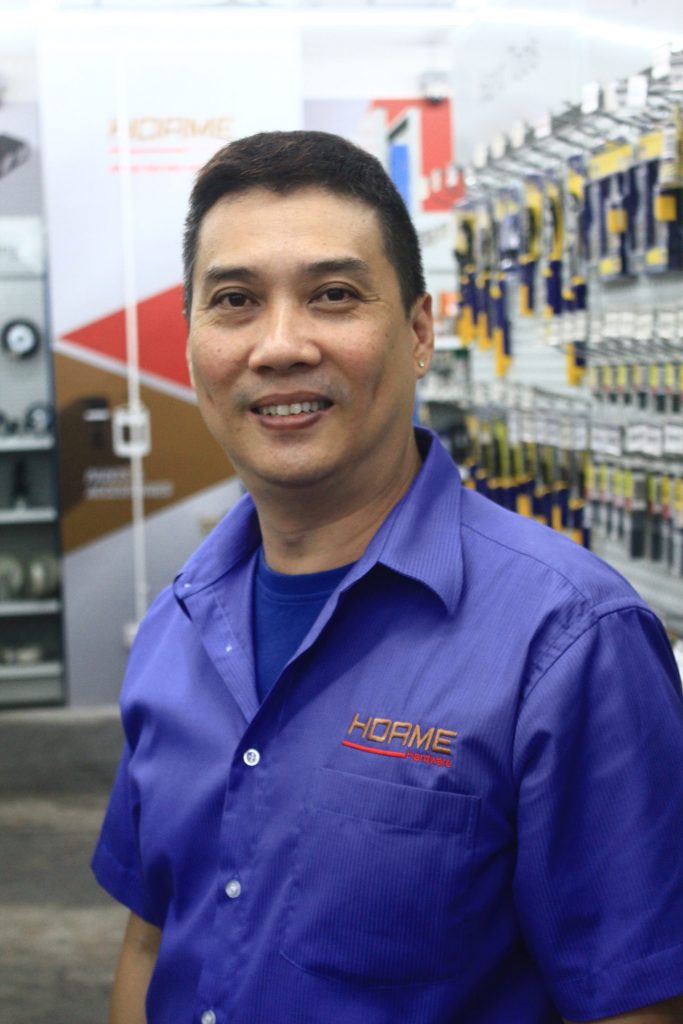 P: How long have you been working at Horme?

S: It’s my 14th year at Horme but I have more than 20 years of experience in the hardware industry. It’s currently my third year at our location in Jurong and I manage around 7 workers here.

P: Do you think the hardware industry will change or grow further?

S: Yes, yes.in fact now you see, everyone is thinking how hardware shops will be in 10-20 years time. In the past, if you browsed the internet for hardware shops, there were only a few. But now? There are more and more. Nobody really knows how the industry is going to change but everyone is investing in the future. If customers are ordering more from our online shop, then maybe we won’t need retail. If that’s so, we’re already prepared. We have invested in our online store and we’re waiting for what the future will be like. Everything is in place and ready.

P: What has your career in Horme been like?

S: When I joined them, I was just a retail assistant. Selling hardware doesn’t really change, only the models change.
In the olden days of physical hardware stores, we had to learn everything ourselves. Our bosses never taught us, they just reprimanded us. The first time I joined a hardware store before Horme, I thought it was special because I didn’t know anyone who worked in a hardware store. Secondly, to me, selling hardware felt like a ‘man’ thing to do. And thirdly, the working hours. [chuckles] We are not like retail malls, where you need to work different shifts. In hardware it is straightforward: Monday to Sunday, where Sundays are alternate and Saturdays are half day. So my working hours became shorter.
When I joined, the environment was different. This was back in the roadside days.

P: When was this, how long ago was this?

S: Oh, very young. I think this was year 2000….something. In the old days, the lao jiao (superiors) were not well-educated, they learnt trade when they were new and slowly picking up. So when a new guy appears, they will treat him like he’s coming to take over their place….they tend to ‘折磨’ (torture) new workers.. So during those times I also kena, but my mentality was always that “It’s okay, it won’t kill me”, and that’s how I survived. At the end of the day, you must depend on yourself. At that point in time, I was quite a positive thinker, I treated it as a learning experience. If I was reprimanded, I tried to find out what mistake I made, what I didn’t understand. I think that’s what led to me getting ahead quicker. 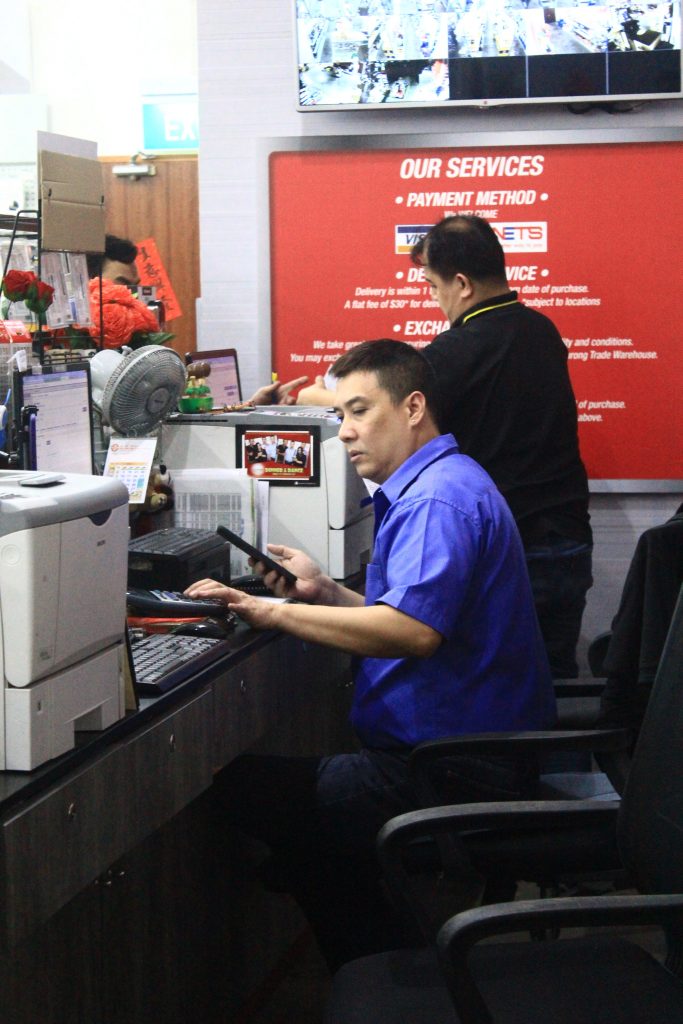 P: Is there any specific incident you can remember from this time?

S: During my first month of work, my superiors asked me to pack boxes and then left me to myself for the whole day, 8 hours. When I was done, they told me I had done everything wrong and instructed me to redo it in another way. They didn’t teach you anything and left you on your own by the roadside. But they forgot that I’m not like other people. [laughs] When I was packing boxes, I was listening to their conversations! I learnt from how they sold products and that’s why I picked up quickly. I even brought back the (product) catalogues after work and studied them on my own.

Also, the regulars didn’t want me to approach customers. But I approach mah! Some customers can be nasty, but there are nice customers as well. Over time, this is how I learnt the trade. Getting scolded never mind la, but you learn fast. You must push yourself to learn faster than anyone else. Learn why you should use one product over another, and why you need this product. How they sell, how they pack. It all depends on how much you’re willing to learn.

P: So personally, what do you think got you to this spot in Horme now?

S: I think it’s because I’m a known product guy. My ex-manager and I, we used to stay back after work hours to practise our craft. Sacrificing a bit of time to learn helps me in my work and the difficulties that I experience in selling. It’s been 14 years now. [laughs]
Also, I’m always willing to try. You let me try, I will try. If you don’t try, you’re letting the opportunity slip away.

P: Do you encourage young people to enter the hardware industry in the future? 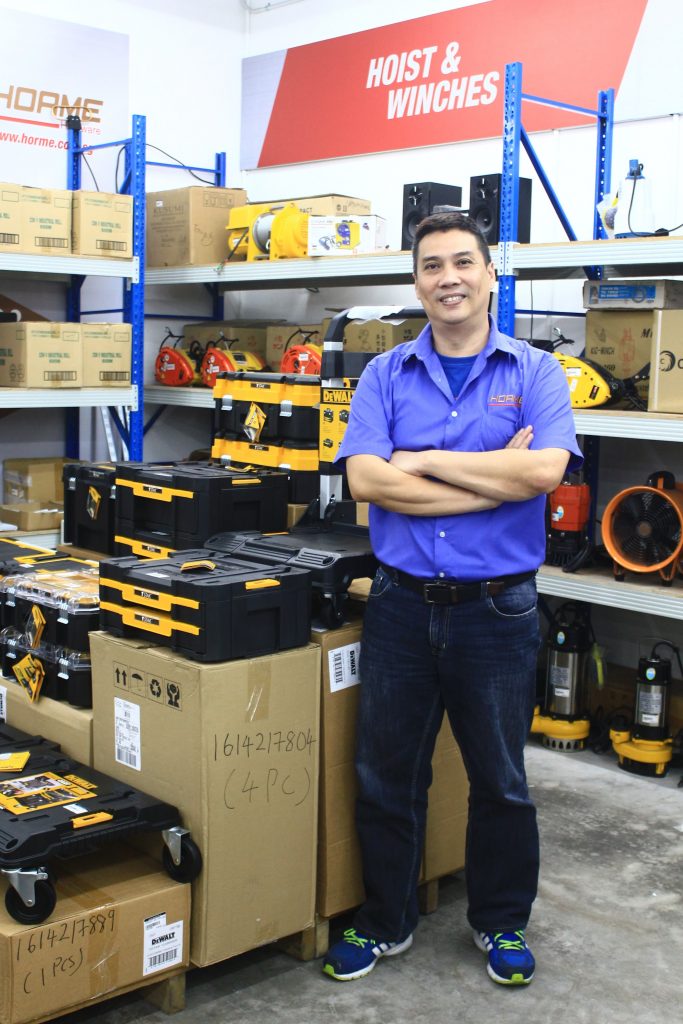 S: I think young people have to know what kind of life they want to pursue. We already have strong career paths for them. Hardware is so broad! First thing I would ask them: Do you have any vocational background? If you do, I welcome you. If not, they should pick up and take a course. Nowadays its about working smart, not hard. In the past, we were told that if you work hard, you will be rewarded. But now, with automation and technology, working smart is valued. Yes, of course it’s a viable career path!

P: If there’s one thing you can tell the general public about the hardware industry, what would you say?

S: The hardware industry is fine-tuning for the future. I think it will change in terms of technology, because we need automation and computer knowledge to increase our productivity. Down the road, you will need to be focused and professional. No more singlets and shorts, our image is becoming more presentable. I think the hardware industry will become an increasingly professional job. As people in the industry change to adapt to it, the entire industry itself will have to prepare to change to keep up with the 21st century.

Squash the Wastage in Your Procurement (And Everywhere Else)!

What is a Multimeter? Uses of Digital Multimeters in Test & Measure

Facts You May Not Know About Dwyer Instruments

All you should know about Loctite Adhesives