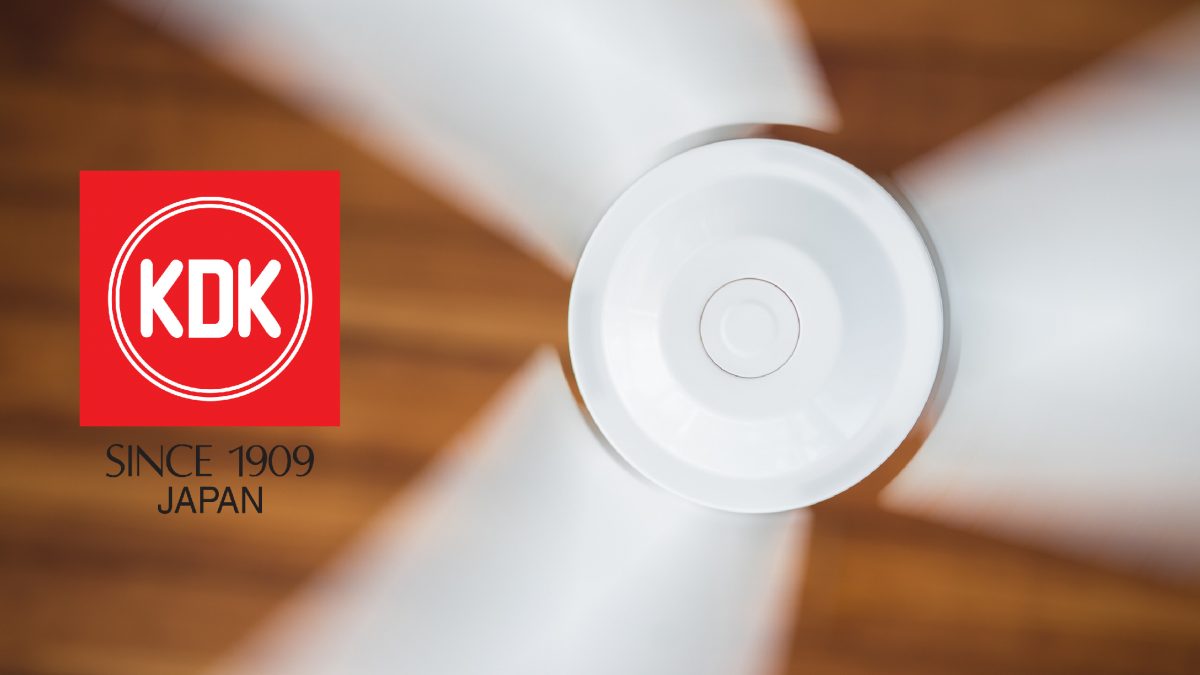 KDK, famous for being the first manufacturer of Electric Fans, stands for Kawakita Denki Kigyousha. Try saying that three times as fast! KDK originally started with just electric fans, but has now managed to expand its core to include Ventilating Fans and ceiling fans. Today KDK has taken advantage of its growing market and expanded through Asia, the Middle East, and South-Central America. Now this is about 109 years of growth in the industry. Following back through a timeline, you’d see that KDK was founded in 1909 as an engineering company in an electrical industry. It didn’t take long for popularity to hit and mass production of electric fans to take off. That was the start of a new beginning go KDK, still known as Kawakita Denki Kigyosha at the time. By 1917, a new utility model had been produced and applied to their electric fans. Within just one year of that success, the trademark of Kawakita Denki Kigyoshi was born. KDK was registered and established.

From then on, engineering continued to expand the business, eventually coming out with the development of the ceiling fan. This being the first ceiling fan in the world, it was a big deal when in was developed and launched in Japan in 1921. As with many businesses, with time many merge or partner with other businesses. KDK was no different. In 1956, Osaka Denki Seiki Co., Ltd was established and became a member of the Panasonic Group and was later renamed Matsushita Seiko Co Ltd. Further growth simplified the KDK trademark, which was registered in 1960. On the 70th Anniversary, KDK produced a special desk fan. Over the next 30 years, KDK continued to grow, expanding overseas, establishing additional sales companies in other countries, and even changing the company name of Matsushita Seiko Co. Ltd, o Matsushita Ecology Systems Co,. Ltd. As you can see, with the constant growth that KDK has had, it’s no wonder they’re so well known for their fans. Today we are going to look at four different kinds: ceiling fans, wall fans, standing fans, and one of their fancier ceiling fans with an LED attachment.

KDK’s ceiling fans are simplistic and functional. Their 120CM ceiling fan has a regulator. It’s great for a bungalow, semi-D, or apartment with a high ceiling, preferably 3 meters or above. The regulator is a compact size condenser. One great benefit to this fan is its 48 inch blade span and 5- speed selection. You’ll never have to worry about being too hot or cold again. There’s bound to be a speed you’ll find comfortable. And of course, safety first, these fabulous fans are equipped with a safety wire and cut-off safety switch. Its thermal fuses prevent it from overheating. To top off the safety, it’s “fall prevention of blade adopted.” And it’s all for the priced of less than $100 USD.

KDK’s wall fans have 30 cm metal blades. Not as much as the ceiling fans, but still great, there are 3 speed options for these. There’s even an ON/OFF by pull switch. Lastly, there’s oscillation control and keeping it simple, there’s opaque plastic. With a similar price point to the ceiling fans, the KDK Wall Fan30 CM Metal Blade is around $110 USD.

Now for those of us that need our on personal fan that we can transfer around the house wherever needed, KDK also offer standing fans. It’s a 26 inch industrial stand fan. There’s motor copper wire power and 3 speed options (running between 1300 – 1400 rpm). For safety purposes, there is a fan guard which is a closed version. While the blades might be aluminum, the base of the standing fan is a crossing rubber base.

Feeling Fancy? Get a Two-in-One!

Now we promised we’d mention it, and trust us when we say that it’s nice. The KDK 5 Blade Ceiling Fan 150 CM LED Lamp with a remote control runs at a price point of about $815 USD. It’s direct current motor adapted, has LED lighting with 3 brightness options. Those options are White, Cool Daylight, and Warm. TO be eco friendly, there’s an auto model with an eco mode function by temperature sensor. Who needs AC, when you have this ceiling fan? To continue with the fancy model, there’s a 3D blade that helps to deliver smooth and strong air flow with its PPG blade material. To top it off, there’s a 9-speed control, sleep model with on and off timer, and it’s equipped with a 1st patented safety design.

Look no further than Eezee for a large range of fans – you’ll be spoilt for choice! Take a look right here.

How to get an instant quotation on Eezee

What is a Multimeter? Uses of Digital Multimeters in Test & Measure

5 Reasons Why You Should Use Air Tools Over Electric Tools